RADD couldn’t exist without the generosity of the campus and Madison communities. Another example of this generosity was just added into the technology array.

RADD uses the Device Side Data controller card to be able to read 5.25-inch floppy disks. Device Side Data used to sell an enclosure for the card, but no longer does. We always felt nervous about just leaving RADD’s two cards out on the table; they are fairly sturdy (we admit we have dropped them a few times), but no electronics enjoy rough treatment.

Luckily, John Ryan, a Student Shop Technician at the College of Engineering Student Shop came to RADD’s rescue. He drilled and cut a small plastic equipment box to hold the card safely with the ribbon cable and USB cable plugged into it.

We are very grateful for Mr. Ryan’s work!

RADD coordinator Dorothea Salo has been nominated for a 2016 Community/Capacity Award from the Digital Library Federation for her work with RADD.

This is a tremendous honor, and Dorothea and RADD are in phenomenal company! Many thanks to the anonymous nominator(s), and congratulations to fellow nominees.

RADD has been a community effort from its beginnings. This and other honors rightly belong to all RADD’s planners, donors, builders, and supporters. Our thanks to everyone who has supported RADD!

We are pleased and proud to announce that the Ira and Ineva Reilly Baldwin Wisconsin Idea Endowment has chosen to fund RADD to do proof-of-concept audiovisual digitization work this summer.

RADD will digitize unique audiovisual materials on a variety of physical carriers from:

The Baldwin Endowment mini-grant will also fund repair of some of RADD’s equipment.

SLIS students Courtney Becks and Logan Rains have been hired to work on this project alongside RADD builder Dorothea Salo.

RADD will be in the mix at the inaugural Madison Mini Maker Faire, on Saturday May 14th from 10am to 5pm at the Monona Terrace Convention Center.

We currently (subject to change!) plan to be able to handle onsite:

(We can’t bring all of RADD; it wouldn’t fit on the table!)

You are welcome to bring your own materials to test RADD on (no charge). We will also have materials available to demonstrate with. Hope to see you there!

As always, huge thanks to all of RADD’s donors, supporters, and users. RADD wouldn’t be nearly so rad without you.

RADD currently sits in an open section of the SLIS Laboratory Library. This has obvious advantages for student use and experimentation, but it also raises the spectre of damage and theft.

In fact, RADD has had materials stolen. In fall 2014 someone stole a Canon PowerShot A2400 digital camera from RADD’s bookscanner, and in fall 2015 someone walked away with the microcassette player donated by Dr. Ethelene Whitmire, which had not yet been secured. Aside from posting pictures of Latin curse tablets—tempting, but not friendly—what could we do to protect our investment in RADD?

Larger pieces of equipment are much easier to secure. Kensington and other security-product firms sell widgets that hold security cables that can be glued onto machines. The cables can then be secured to tables or possibly to a desktop computer. Kensington also has lockable cable holders, to evade theft of USB and power cables.

The videocamera RADD uses to capture video from Mini-DV tapes presented a special challenge: no available surface to attach a security widget. The solution we chose was using electrical tape to bind together the hook-and-loop band intended to go around a filmer’s hand, and then passing a security cable through the band.

Smaller materials—cameras, microcassette recorders, Raspberry Pis—are harder to secure, partly because cable widgets are too big to attach to them, partly because they do not have much surface to attach security widgets to. The solution we are exploring is hook-and-loop strips. Currently RADD’s Raspberry Pi (part of its bookscanner) and microcassette recorder are attached to furniture this way. This is “security by nuisance” rather than a real security lock; a determined thief could still make away with the equipment. Our hope is that the noise and nuisance of prying the hook-and-loop strip apart is sufficient theft deterrence for now.

How did SLIS choose which analog material RADD can digitize, and which digital media it can capture data from? The answer is part planning, part serendipity.

The group of Digital Curation students who first made concrete plans for RADD did not do so until they had conducted a sweep of the SLIS Library and SLIS faculty and staff to find out what at-risk analog and digital media needed attention. They discovered:

They also dealt with additional formats that instructor Dorothea Salo told them would be important in future SLIS coursework: 5.25″ floppy disks and vinyl records, for example. They then priced out the necessary equipment, sometimes offering choices between ideal-but-pricey equipment and less-good-but-cheaper equipment.

Not all these media have yet joined RADD’s capabilities. Film, microfilm, and microfiche digitization equipment turned out to be vastly too expensive for RADD’s minimal startup funding. (Super-8 film digitization is still a possibility, but the need for it has not yet turned up.) We also made some purchasing missteps: consumer-grade video digitization equipment from Hauppauge, for example, proved inadequate to capture from our Betamax and U-Matic machines, though it did adequately with VHS. We wound up replacing it with the prosumer-level Aja Kona LSe video-capture card, which has performed much better. (Aja’s technical support is also excellent.)

Other RADD capabilities came about because of donations. We did not originally know that the IMation SuperDrive kindly donated to RADD by Catherine Pellegrino reads the highly rare 120MB “IMation SuperDisk” as well as ordinary 3.5″ floppy diskettes, but we were certainly pleased to discover the capability! As for the Iomega Jaz disk, RADD’s ability to read it is the result of two separate donations of a non-working external drive and a working internal drive. A few minutes’ work with a screwdriver pried open the drive case on the external drive, which then happily fit around and powered the working internal drive. The resulting “FrankenJaz” drive is unlovely but entirely functional.

Our advice to organizations considering building something like RADD:

RADD can currently digitize audio from audio cassettes, microcassettes, and vinyl records (33 and 45 rpm; if we run into 78s we’ll have to buy more equipment). We have a reel-to-reel player awaiting cleaning and overhaul also. The playback equipment is nothing special, though microcassette recorders are starting to be difficult to buy new these days, so check your favorite auction website or ask your favorite social scientist.

We found ourselves buying a fair few audio adapters; we recommend setting a hundred dollars or so of budget aside for cables and adapters generally. The basic analog audio jack setup is two RCA jacks (one red, one white) into which a single cable with two plugs (again, one red and one white) fits. (If you have a video RCA cable with red, white, and yellow plugs, it will work as well.) Microcassette players and some other audio players you’ll run into won’t have RCA jacks, though, so you’ll have to buy an RCA adapter for whatever audio-out jack they do have.

What makes the magic happen is this TASCAM USB audio interface and mixer. This gadget is what collects the sound from the analog playback equipment and sends it to the computer over a USB cable for capture.

The only problem we have with it is that it only has one set of audio-in jacks! Forcing RADDers to plug and unplug players from the TASCAM unit is unreasonable, as well as risky to the equipment. We solved this problem by buying an audio switch so that RADDers can switch to any player at the push of a button. We are labeling buttons with our handy label-maker: 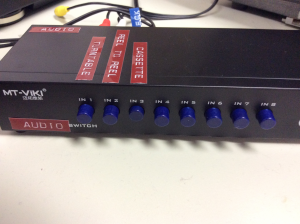 We installed free and open-source Audacity software for audio capture and editing. Audacity is the exception to the rule about open-source software being utterly unusable. Though Audacity is very powerful, we find it fairly simple to use for simple purposes. It remembers settings between uses, which means RADDers generally don’t have to worry about them because we set them according to best practices in audio capture: 96000Hz Project Rate (as Audacity calls it) and save as 16-bit AIFF or WAV (which our instructions tell RADDers how to do).

Audacity has dozens of “effects” it can perform on digital audio. The one we use most often is “Truncate Silence.” Have an audio cassette that’s 90 minutes long, all but 10 minutes of which is silence? Truncate Silence fixes it!

If you’re new to this, you are most likely to err in choosing the file format. Walk away from the mp3 setting! MP3 is a “lossy” audio format not suitable for preservation. AIFF or WAV is what you want. If you need an mp3 also, save out another copy of the file.

We hope to discuss setting audio levels in another post.

RADD is a complicated system. It teems with cables, cords, dongles, boxes, and other miscellanea. After a point, putting a hand on the correct cable becomes all but impossible without labeling.

We would not have expected this, but an ordinary label maker has turned out to be one of RADD’s most important tools. We have used it to help tame USB-cord and power-cable chaos: 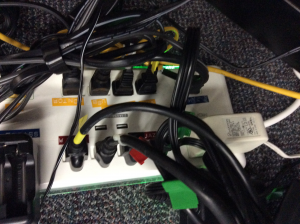 We have also used it on our video and audio switches so that RADDers can pick the analog player they’re using without swapping cables: 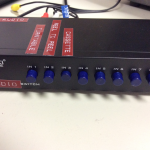 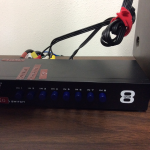 If you want to build your own RADD, I strongly encourage locating one of these handy little gadgets.

The prize of the collection, in my opinion, is this recording of the West Bend High School Concert Band: 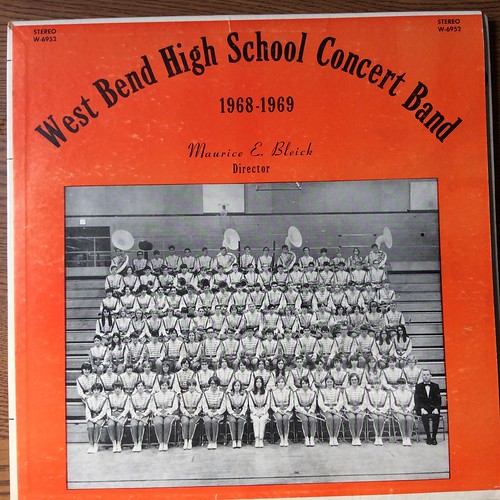 Much of the rest comes from the West Bend Corporation, longtime manufacturer of household gadgetry. The sales records (there are two) should be great to listen to, judging from the cover of this one: 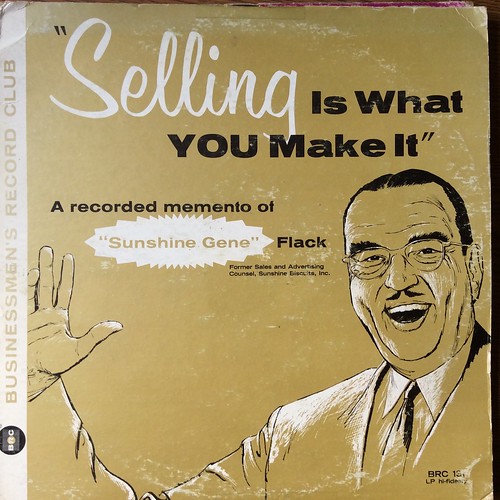 Also included, several VHS videocassettes (sample below) and one U-Matic: 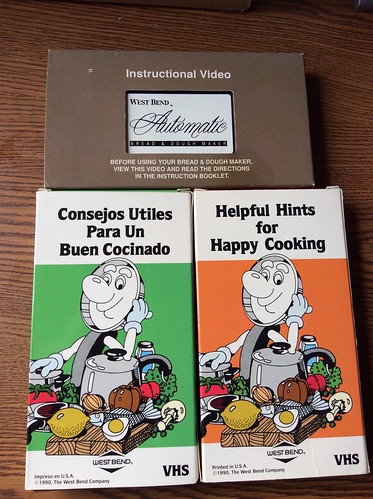 And a substantial number of audiocassettes: 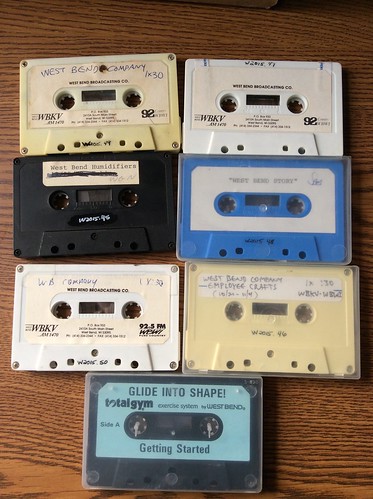